I use to look at my son and see, myself.  He has my eyes, my smile, and my verbal expressions, and I always thought that it would stay that way because he is with me 24/7.  Recently, I’ve been noticing my son’s father seeping out of him.  He has his father’s lean body and long legs; he walks like his father, laughs like his father, tilts his head like his father, and he smirks and hunches like his father (WOW).  Even though he almost never spends time with his father, he has most of his mannerisms (go figure).  Sometimes I wonder if he will also inherit any of our habits (good and/or bad).  My purpose is to make sure he grows into a responsible man and, hopefully, an active and positive parent.  I strive to help him become that which he does not have, a good participating father.

I am told that a child learns how to parent from his/her parents, but I don’t know if that is always the case.   There are great fathers that grew up fatherless, and mothers that grew up motherless.  That fact assures me that all is not lost.

It shocks me to watch my son, physically, evolve into his father, and every day I pray that he will turn into a better person than his father or me.   Do his experiences define his character?  I’m not sure, but my hopes are for his experiences to enhance the man that he is becoming.

WHAT DO YOU THINK? LET ME KNOW. Cancel reply 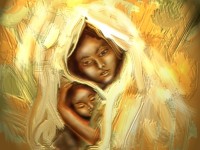 . . . on a journey to help a boy grow into manhood while freeing herself with a lifetime of poetry, journals, and shortbread cookies.